As a preamble, let me say that I know I originally wanted to try to publish something 2-3 times per week. Fact of the matter is that I only get out to the shop 2-3 times per week and for a couple of weeks after finishing the workbench, I spent a week reorganizing the shop. I disassembled my old bench and now the warped plywood is sitting in a corner waiting to be taken to the dump. The sanitation department wouldn't take them on garbage day. Boo! The other thing that's been keeping me from publishing anything is that my daughter who will be 6 months old this weekend is far more interesting with the pace at which she is learning about the world. If only I could pick up wood working skills as quickly! I'll spare you the boredom of being the proud father gushing with what noises she can make or how quickly she's growing... let's get on with the post.

One of the things about taking on a hobby such as woodworking is that loved ones may ask that you build things for them. When it's a spouse that's asking, it may be called a 'honey-do list'. Don't get me wrong, I appreciate being asked to make something. It gives me something to challenge myself with.

It was originally thought that we should have some shelves to put up on the wall. Not quite knowing the best way to go about it, I did some research, and hanging bookshelves seem to be somewhat rare in the internet community. The ones that were out there, were not in the style or of the magnitude that was originally envisioned. I decided that maybe I was out of my depth on this one. Sure, designing something from scratch is an option, but being new to woodworking, I don't feel ready for that. Without the experience to know what wood is capable of, I was afraid that I would make it either too light and thus dangerous to place books on or overengineering it with the result of it looking very chunky. 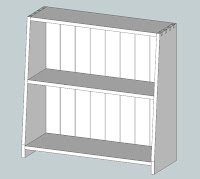 After some discussion, a smallish 2 shelf floor standing bookshelf was the design to go for. Portable, easy to build and not that heavy. Walnut. I had some 6' lengths stacked under my bench. Not enough, but a starting point. Well, the starting point was the design. After some more interenet searching for inspiration, I decided to model it after the bookshelf Matt (from Matt's Basement Workshop) built back in the summer of 2008. It's not quite the same, but looking at the sketchup drawing, you will definitely see the similarities. Dovetailed top, stopped dados and ship-lap back.

A quick trip to the lumber yard for some walnut offcuts and I was ready to go. I was also eager to try out my new 6" jointer.

What? Oh yeah, well, it isn't new, but seeing it listed in CraigsList, I couldn't pass it up. I have tried to flatten and thickness by hand, but was left exhausted and unsuccessful. I don't plan on giving up practising, but the convenience is nice to have. Especially for the particularly harder woods like purpleheart (which I have worked with) or wenge which I hope to work with someday ... But I digress.

A test board went wonderfully. I had already spent some time ensuring the fench and beds were in tune with the blades.

The dovetails for the top and sides were next on my agenda, and over the course of a couple of evenings and Saturday afternoon, I managed to get them completed. I even cut one set pins first and the other set tails first. After having run through the exercise both ways, I have to say I preferred the pins first but I guess it's all in the setup on how you transfer the layout from the cut pins to the tail board or vice versa. Oh, because I didn't refer to the drawing when laying out my first set, I ended up with a layout other than what was in my drawing. When I looked at it after, I had to laugh, but was able to adapt and it's now a 'design feature'. 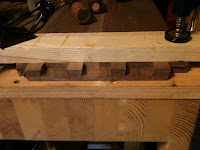 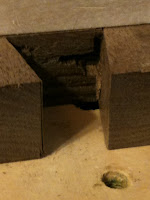 One thing I did come across was an issue of tearout at the middle of the board. I had set up the board onto a sacraficial surface and clamped a vertical surface above on the layout line as a reference to ensure I was chopping vertically. After chopping halfway through - relieving the chips as I went along, I would flip the board and chop down from the other side. When there was only 1/8" of waste left, the remaining waste would snap off pulling fibres out from the end grain leaving a gaping cavity. I know this wouldn't be seen when assembled, but I wondered if there was a way to prevent that from happening. So I put the question out on Twitter. I don't have a lot of followers, but Steve from The Taylor Garage responded and we chatted back and forth. The solution I ended up implementing was to chop from one side until there was only 1/8" left and then flip the board over and make light cuts until it sheared the fibres completely away. My delight at this immediate improvement was manifest as I did a little sitting jig on my stool. Not only improvement in skill, but taking a little more patience and care to do the final cuts a little slower instead of mauling away with a war hammer on an Uruk hai (Yes, a Lord of the Rings reference - I'm such a geek).

Meanwhile, I've also glued up all of the shelves. Each one is made up of 2 boards. More out of the necessity to use as much materials already on hand than anything else. These are pretty straight forward. Gluing up right after milling meant a minimum use of cauls to squish the glue around. 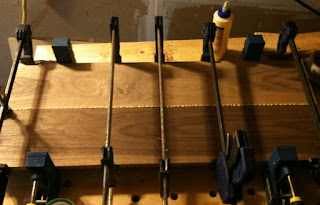 Next week, I will tackle the stopped dados, the rabbet and maybe even the assembly. Let's see how the week goes and how much I (willingly) get distracted to play with my daughter.