Bevel Up or Down?

At Woodworking in America this year, Graham Blackburn was a last minute addition to the seminar lists as David Charlesworth was not able to attend due to pneumonia. Ouch!

Well, I had the pleasure of attending two classes on plane craft by Graham and the one thing I came away with on the second seminar was: 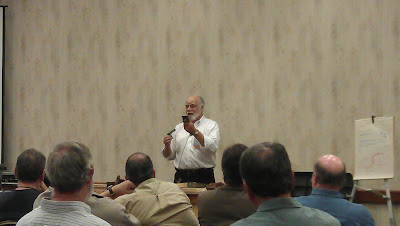 "If you plane is properly setup, you should be able to take it to any piece of wood in any direction and get zero tearout"
I thought, "Come on! Not possible! No way!"
He said the secret (which is really no secret, only a lesson that needs passing on to those of us learning on our own), is to:
So, what about bevel up planes I asked. He said at the end of the class that in order to take a plane to any piece of wood in any direction with no tearout, you have to have a cap iron. I was starting to despair that my investment into bevel up Veritas planes was for naught.

Well, I decided to write it off as fanatical dogma. You know, sort of like saying that pins first is the ONLY way to get tight fitting dovetail joints (just ask Tom Iovino and his experience at the Hand Tool Olympics).

Well, when I got home, I decided to give it a try as it had been bugging me for a couple of weeks now and I finally got an opportunity to put it to the test.

I set up my bevel up smoother to take a really fine shaving and closed up the mouth as tight as possible and set out to work on a piece of curly maple. I then did the same with a bevel down smoother.

To my surprise, I was able to get a very clean surface with both planes. It may be that there may be a more gnarly wood out there that will really prove Graham's statement to be true, but I'll have to wait to find that piece of wood another time.

So, bevel up fans, do not despair. At least from a smoothing point of view anyway. I'll be testing this theory in other configurations, but that will be for another post. Thanks Graham, you've helped me grow in my skill level and although I may dispute your statement on the cap iron, it made me think and that's a trait of any great teacher.
3 comments 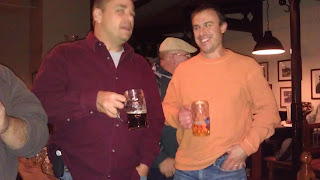 
So to Popular Woodworking, thanks for putting on a great show and hope to see everyone again next year!
0 comments

So, where have I been? Sure it's been a while, life gets that way sometimes. I'll bore you with the details another time.

But it's the end of summer and that means it's time for Popular Woodworking Magazine's annual hand-tool enthusiast's convention Woodworking in America down in Covington KY.
I heard about this event last year too late to be able to arrange to go and negotiated a weekend pass with my family to attend this year. Sweet!

Car pooling down with Ian and Adam took about 10 hours and it was a very entertaining ride. Arriving in KY around 5 pm yesterday, we almost immediately started running into all of the other internet personalities whom I never knew I'd really ever meet. Kari Hultman, Tom Iovino, Scott Morton, Rob Bois, Wilbur Pan and Aaron Marshall just to name a few.

That evening, I found out about a challenge that had been issued to all bloggers to put their money where there blogs were and participate in the Hand Tool Olympics in team format. I found myself partneted with Wilbur and Aaron (mentioned above).

After a good night's rest (I left the bar around 11), a day filled with seminars began. I found myself taking Graham Blackburn's classes on hand planes and their uses in joinery and how and how any plane should be usable on any piece of wood in any direction. He then demonstrated using a smoother on a beautiful piece of curly maple. Simply amazing. I also took my turn at the Olympics and it was great fun. I also managed to capture Kari and Emily (one of the Olympic facilitators) on video using the frame saw to cut what looked like a 10x10 beam. I'll post that one as soon as I can :)
The evening found a few of us at the Hoffbrau house which is a German themes brewhouse pub with a live polka band. Yes, a polka band. The upside was it wasn't hard to get in the spirit with 1 *liter drafts*!
There's a reason I'm focusing more on the people. It's the real reason WIA is so successful. Sure, the seminars and marketplace are great, but without the opportunity to meet the people you have associated with, but have never actually met is simply amazing.

Tomorrow looks to be just as fun, I'll let you know how it goes.

Oh, if you are blogging about WIA, send me a link and I'll make a central post to all blogs featuring WIA posts at the end of next week. You can reach me on Twitter via dm.
1 comments