Today ends the first year of woodworking for me. One year ago, my wonderful wife gave me a tablesaw and it began a year of learning and new friendships online. Who knew that this was where it would take me!

I've learned a lot of basic techniques and have begun to settle into a hybrid landscape of power and hand tools. I have also begun learning how to explore creativity, but expect that this particular avenue of learning will encompass the rest of my life

I'm going to start selling some of the stuff I make next year and even be open to taking commissions. I've registered my website, but am not yet ready to announce the name. You'll just have to wait for the launch!

Anyhoo, I want to keep this brief as I'm currently enjoying the company of my family in Halifax and it's our daughter's first Christmas.

So, where-ever you may be, from my family to you and yours, have a safe and Merry Christmas and a Merry New Year!

(one of my top Christmas Movies - Trading Places)
0 comments

When Life gives you Lemons ...

A couple of weeks ago, I was at the Canadian Home Workshop show. It was my first woodworking show, but to be truthful, it was more of a power tool show than anything else. Sure, there were a couple of workshops and Rob Cosman was there demonstrating his plane craft, but for the most part there were power tools as far as the eye could see.

For my first bowl, I decided to actually make a round segmented dish. About 13" in diameter and split down the middle.

Everything was going pretty well until after I had routed out the recesses and band-sawn the outside circumference. I needed to route the outside and inside edges to give a round-over effect but having dismantled my home made router table (it had finally warped beyond usability) I opted to do it free hand with the bowl clamped down to the bench between dogs.

Routing the bottom edge went fine. Routing the first recess also posed no problem. Routing the 2nd recess however, I slipped and the router bit ended up cutting deeply into the side. Twice. Realizing what I had done, I turned off the router, set it down and resisted the urge to pick up the piece and hurl it to the concrete floor. I'll admit that I muttered a bit and stared at the dish in sinking dismay.

.... Or was it? Something told me to pick up a chisel and just start carving. For the next little while, I chipped away at the dish. To be truthful, I totally lost track of time and just followed my instinct being mindful of the grain so that I wouldn't tear the wood. Pausing only to give the chisel a couple of swipes on the sharpening stone.

It was pure Zen.

When I was done, what I saw reminded me of sand and how it can erode away at man made structures if left unchecked with the desert claiming half of the city, but the other half still in good order. Hence, I give you the dish "Erosion". 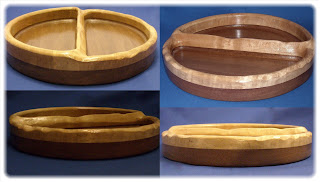 I'm quite proud of what I've accomplished. It may not be the next Mona Lisa, but I've grown by refusing to bow to defeat just because of a minor setback. What was to be a straight forward dish has been turned into a work of art that I could never duplicate 100%

Do you have a story where you took the woodworking lemons that were handed to you and turned it into lemonade? Leave me a comment and let's chat about it!