Colds in the summer time really bite. It's been almost 2 weeks that I've had this malady. I think I got it when we went to a party for the daughter of my wife's cousin held at a children's party places. The type where there's all sorts of things for kids aged 2-10. Bouncy castles, rocking horses and pizza for all. Plus all those grubby little hands from all sorts of kids with their advanced immune systems that carry viruses that the average adult with 1 child or less are ill-equipped to combat.


For about a week, I found myself tiring quickly and on medication that will mask the symptoms. I think really that the virus just goes into hiding, resting until the medication wears off to renew its onslaught. I've felt better, but I've felt far worse as well. 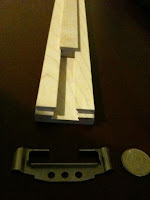 I've felt good enough now over the last week (with just a lingering cough and humidity/smog triggered asthma) to resume my work on the cabinet. While I was sick and refusing to mix medication with power tools, I put the time to good use and first did some research on options. I discovered that centre mount drawer slides were the least amount of work and would not compromise quality.

Having learned some from my experiences, I decided to query the good people that hang out on Lumberjocks as to the best way to mount them. Lumberjocks really is a great community and it didn't take long to get the information I needed. A single board running up the centre of the cabinet with some support rails mortised into it running from the back to the front in which to mount the fixed part of the slide.

Today I finished the cabinet by adding the drawer hardware. While I feel relief that the first project conceived in the shop is done, I know that there will be modifications needed. A door perhaps over the hangers section; and, doors over the shelves. Maybe add pull out boxesor the bottom cubbies? It's really a bit of a let down to know that a project you want to consider done is not really quite done. 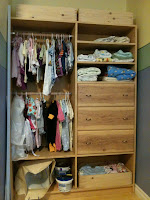 For now there's other priorities. Like building my workbench. Anticipation once again is rising!