Life's been pretty busy lately. Taking care of a 5 month old will do that sometimes. Between work and family and getting out to the shop, I'm pretty beat at the end of the day. Here's a catchup on what I've been doing since my last post.

Evening 4 (Aug 9) - Filling a void in my ... bench
Not a lot got done today. The glue from Saturday went fine. There were some minor gaps between the sections in a couple of places, but nothing major. This top is as solid as a rock. It's not as heavy as maple would be, but seeing as I'm a one man show, I am greatful. I mixed up some epoxy and filled in the gaps as well as one knot hole where the knot had vanished leaving a 1/4" hole. Probably from the last pass of the planer. My phone was out of charge and I had left it inside. Sorry, no pictures.

Evening 5 (Aug 11) - Needing a base
They say the foundation is the most important part of any structure. Experience with my old bench verified that for sure! Today I cut down all the lumber to length for the legs, rails and shelf slats. Doesn't sound like a lot, but 21 pieces of lumber were piled at one end (or leaning against) of the completed bench top by the time I deemed it was too late to be running loud power tools. Again, my phone (which incidentally is a better camera than my digital camera) is dead and up in the office charging. Piles of lumber aren't exciting to look at anyway. Unless they're in one's own shop! 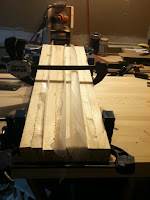 I planed all of the pieces to 1 3/8" thickness tonight. My ears are thankfull for the hearing protection. Although with the heat and humidity, I think my respirator may need a day to dry out from the sweat accumulated inside. I did manage to get a bit further. Although it was too late for more loud power tool use, I did manage to rip the leg boards down the middle and get them glued up. I did all 4 legs in one set of clamps. If you do this, make sure you put a piece of wax paper in between each leg. If you don't and you're as liberal with your glue as I am, you may find yourself with a mini slab! 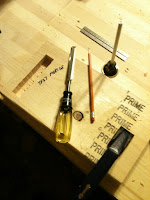 I was dripping all over the place but I pressed on and tried to make some progress anyway. The plans call for the tenons to be cut at this point while the glue in the legs are drying. I don't like doing the tenons first as I find it easier to sneak up on the fit easier on the tenon rather than trying to make an exact match on the first try. The glue in the legs are dry anyway. So I decided to practise a little and make a test mortise. Using a 1" forstner bit, I hogged out a path for a 5" long mortise and then cleaned it up with the chisel. The results were rather lack luster. Unsightly waves were shaved almost to smooth. Going further would cause the mortise to open to more than 1" and still not look very clean (The mortise was also threatening to fill up with sweat). I've done mortises using my router in the past and they look much cleaner. I know you never see it again, but I prefer a clean fit. The router gives better results not only from appearance, but in ensuring a vertical mortise wall. Chiseling leaves it to chance that the walls may flare in or out. In is fixable. Out is a disaster! 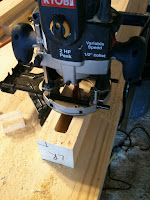 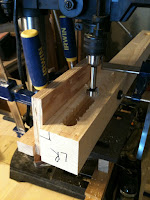 After laying out my mortises, I hogged out the bulk using my drill press and forstner bit to the required depths of 1 or 2 inches depending on the mortise. Then (after drying out my safety glasses thoroughly) I broke out the router with edge guideand the monstor long bit and shaved down the sides. A little chisel work on the corners was all that was needed to complete the job. I love working with hand tools, but I appreciate the clean look of my router trimmed  mortises as well! I got all 4 legs done this way in decent time (at 3 mortises / leg).
Evening 8 (Aug 16) - Experimenting with Tenons
Forgot my camera again. By the time I was done this evening, I was too tired to go back into the shop and I was feeling lazy also. Tonight, I cut all my tenons. Let's say it was a bit of an adventure! The shorter pieces were done on the table saw using my dado stack. Nothing exciting there. The long 47" rails (49" with tenons) were a bit more challenging and required a bit of ingenuity. I don't have a tenon saw yet, and have been on a bit of a power tool kick of late. Out came the router again. Cutting a 3/16" depth isn't that difficult. cutting it 1" wide is impossible on its own. My first attempt turned out disasterous. trying to maintain a router level with the face of the board while overhaning the centre of the bit 1" out from the edge is an exercise in futility. The bit ended up going too deep. Of course, I wasn't doing this on a test piece despite being an experiment. Stupid really. Someone recently said that the most important tool is patience. Does that ever hold true.

After I finished looking at the board in dismay for about 2 minutes I began to think about how to fix the problem.  I took another board (one of the slats that had been milled to the same thickness) and placed it perpendicular to the long rail, but out from the end about 3/4". Looking down on it, it would have looked like an L shape. This provided the required support to get to the correct depth while supporting the router base on both sides. Of course, I had to cut an extra 1/4" off the tenon that I screwed up adn glue a 3/8" thick piece of wood to the cheek of the tenon. I then came back with the router one last time and machined the tenon to the correct thickness.

The final thing that I did this evening was to glue up the sides of the base. The long rails won't be glued in, rather they will be fastened using the 6" long bed bolts. But that's for tomorrow.

Evening 9 (Aug 17) - Final assembly of the base
Not taking my camera with me is becoming a bad habit. I guess focusing on the job at hand is what's most on my mind.
This evening, I completed assembly of the base. I drilled the counter sink for the heads and washers of the bed bolts using my 1" forstner bit and followed that up with drilling the shafts for the bed bolts as deep as my brad point bit would go with the leg attached to the rail. I then took the leg off and drilled to the required depth in the rail.
Once this was done in all 4 legs, I took the rails and began milling out the slots for where the bed bolts would have the nuts attached. At first, milling to the recommended depth wasn't deep enough to hold the washer because the original plans call for a 5/16" washer. A 3/8" bolt will not fit through one, so a 3/8" washer is really what's requried. The washer would not fit deep enough for the bolt to slip into. A little deeper ... no, not deep enough. A little deeper ... eh? I heard a slightly different sound like when you break through the other side with a spinning router bit. I turned off the router, unclamped the piece and moved the board aside. I ended up milling right through the leg into the top of my bench!
That hurt! (I took this picture later on)
At least I got the rest of the base completed and assembled. I need to sulk for a while.
Evening 10 (Aug 19) - Dog holes and the bench vise comes out
Tonight I laid out the Dog holes and drilled the first row. You really need to pay attention to where your legs are going to end up before you start drilling or you might find yourself laying the top with a dog hole right over top of a leg or rail. I also spent time gluing up 2 boards that will make up the chop of the vise and laying out where the vise will sit. Being a right hander, the traditional place is on the front left corner. I decided to use the same SPF lumber for the chop. Although I know hardwood is better for the chop, I wanted to use the SPF for practise on laying it out and ensuring I get a good alignment before I try it on hardwood. Ask me again next year if I've changed it out for maple.
Day 11 (Aug 21) - More dog holes and the vise is installed 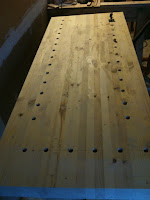 The instructions that come with the vice are perfect. with the template to lay out the holes for the movement, it couldn't have gone any easier. I also drilled out the remaining dog holes and took the a chamfer bit to all of the holes to break the edge.
Finally, I put in a dog hole on the vice chop. My drill bit is not long enough to go all the way through. Visions of losing a dog down that hole danced in front of my eyes followed by a vision of me having to sink a fortune in dogs at the Lee Valley store as each one dropped into the chop never to be seen again.
Nuh Uh! Not going to happen! Okay, now that I've snapped out of that nightmare ... 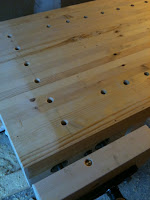 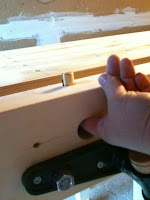 Taking a forstner bit to the front of the chop, I drilled down to the depth of the dog hole and cleaned it up with some sand paper. I reached in and without pushing the dog all the way in, I checked to see that I could reach it and push it back out. Success!
Evening 12 - The end is in sight! 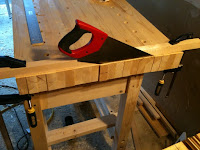 A momentous occasion! I got the top attached to the base. Because SPF is light relative to maple, I was able to man handle it onto the base with only minor difficulty and attached it with 6 lag screws. The other thing I did was to hand cut the sides of the bench to uniform length. That was about it for the night as my arm was utterly destroyed in the process. All that's left to do is to install the shelf slats and rag on a couple of coats of oil. 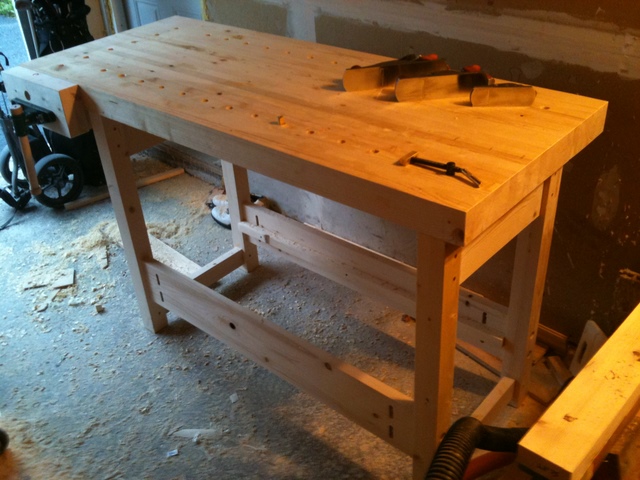 Oh, then there's the removal of the old bench, moving the new one into its place and taking it for a test drive with my hand planes which I'm eager to put to the use and capability for which they were intended. I can hardly wait!