My father was a Fin through and through even though. Like many who have chosen to find a new way of life in Canada, he was immensely proud of his heritage, loved all things Finnish. He would read Vappa Sana, eat pickled herring, drink Finlandia vodka and take a Sauna (not all at the same time though - although he had been known to sneak vodka into the sauna). He was my childhood hero. 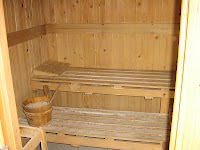 Occasionally, someone would throw water onto the heated rocks to create a blast of steam which turned the air from comfortably hot to lung choking, skin searing agony.

This very act would either send me to a lower bench or scurrying from the room in search of breathable air. I think Fins try to make bathing an act of bravery. If I left, my father would sternly say, "If you leave, you can't come back!" So I would hunch down on the lowest bench and hold my breath as I didn't want to be excluded or be less of a man (I was 12). The moisture would quickly dissipate either through a crack under the door or sucked into the dry ceder panelling on the walls. I would stay on that lower bench, but sit up a bit straighter. If I made it through the entire session without leaving, I would somehow feel like I had completed a step on the passage to adulthood. It didn't always happen.

25 years later, I can take the heat, but still hold my breath when the water is tossed onto the rocks. There's just something about hot humid air that I can't seem to handle.

This week, has been hot and humid. Not that clean heat of the sauna. The hot, sticky and nasty humidity that co-mingles with the polution in the city air. You can't cool yourself down by sweating as your sweat won't evaporate. The dirty, muggy air clings to you making you feel filthy just by being outside. Stain and water based finishes won't dry after the initial tack up because they can't push more moisture into the air. Seems many things had stacked up against me this week in making progress on the nursery cabinet.

My house has also conspired against me in the attempt to emphasize the discomfort I'm feeling. The air conditioner expired quietly on its own over the winter and was only replaced yesterday.

So, without a solace to retreat to, I decided against working out in the shop this week and hope to get back to it next week with a break in the weather predicted. This weekend is slated for garden work. It will be sweaty work, but at least I can retreat into air conditioned comfort at the end of the day and enjoy a cold beer and look forward to getting back into the shop.

Hopefully my tools haven't started to rust during this spell of humidity. Somehow, I think they'll handle it better than I do.