Artfest - Something to Strive for?

It's funny how inspiration can strike. Last Saturday, I saw a video on Woodworking for Mere Mortals on how to build a band saw box. It was also a day where Marsha and I decided to go see the annual Pickering Artfest (not sure how long the link will last, but info can be found here if the first link breaks). Essentially a city run festival in The Esplanade Park outside City Hall where numerous artists display wares mostly for sale, but some hold seminars or activity sessions. This year there were about 80 individual artists and 2 guilds that had stands.

A lot of different styles of art were on display. Paintings, drawings, hand made jewelry, stained glass and some woodwork. One stand had some band saw boxes and sculptures that looked rather last minute, but they were selling. While browsing, I saw 2 coin bank boxes and one puzzle animal snatched up by various patrons. Maybe I'm too critical having been a member on Lumberjocks where some fantastic works have been displayed. 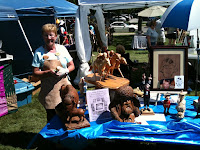 There was also 2 wood carving guilds present. I remembered only at the last minute that I had my phone with me so I decided to take a snap of one exhibit with the permission of Marjorie one of the proprietors of Paterson's Pastimes (sorry, they don't have a website but can probably be found through the local chapter of the Ontario Wood Carvers Association). Marjorie (in the picture) carved the mountain man sculpture and another lady that she was sharing the table with carved the racing horses. It was an interesting show for sure. I picked up some fliers for the 2 carving associations (the other being a more local guild) and may have to check them out to see if carving interests me. I am after all trying to explore as much as possible in wood working to determine what direction I want to take.

So, I mentioned a video back at the beginning. Yes, I mentioned in for a reason. I was feeling creative after our visit to Artfest and decided I wanted to make a heart shaped box for Marsha. After some pondering and some surfing, I ended up downloading an image of another heart box and printing it out (I can't draw worth a darn), I proceeded over the next few days cutting, gluing, and sanding. Sanding and yet more sanding. You see, the 1/8" blade made rough cuts and caused quite a bit of burning even though it was a brand new blade. It ended up snapping causing a fairly loud bang! Checking my workpiece and my shorts, I was thankful that I only needed to change the blade. I had to revert back to my 3/8" blade and surprisingly, it was making smoother cuts with less burning. Go figure. 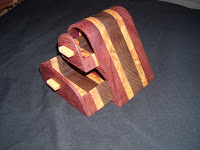 I finally finished it on Wednesday with Tung Oil/Wax and handed it to Marsha last night after a final coat of wax. It was well received and I'm starting to think that maybe I can make some stuff over the winter this year and enter into Artfest 2011. Let's see how the summer goes first. I am hopeful though! Who knows, maybe I'll even end up selling something!