Another number of firsts

Well, Christmas has come and gone and another decade is upon us. I hope everyone had a great Christmas and even better New Year's party. We got to spend the week before Christmas with my mum in Halifax and Boxing day with my wife's parents. It was all good. New Year's Eve was spent quietly at home which while not a party, was a fine way to wrap up a hectic year in my opinion. 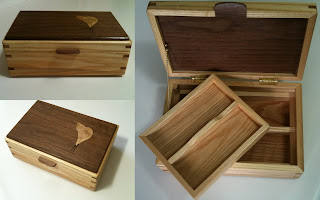 Not going to go into great detail on this build as it was pretty straight forward. I made a jewelry box for my special lady. One made of Ash and Walnut with Maple inlay. The box making process was taken from Fine Woodworking Magazine's web article by Matt Kenney. You will need to be a subscriber to see the whole series. The inlay process was taken from The Wood Whisperer episode on router based inlay.

It was my first box other than the one made with my bandsaw previously, but still a first. It was also my first attempt at router inlay. I chose a Calla Lilly as the focal point of my lid, and with that I chose a nice straight grained piece of walnut so as not to detract from the inlay.

The other thing was I have taken the plunge into turning. I have picked up a Delta 46-455 midi lathe and have tried my hand at some pen turning and want to take a stab at other things like bowls, furniture legs, lamps ... the list goes on and on and on. Taking a look around the web, there are some fantastic creations.

Oh, if anyone has some tips on skew chisel sharpening, please let me know. It's one tool that's been frustrating me so far. Sharpened very carefully, I'm only getting dust in my attempts to get peeling cuts.

What about the ever so infamous year in review and plans for the coming year? I think I'd like to go into that, but that's for another post.