Last couple weeks have been pretty busy. Seeing as I would have had nothing to write about, I decided to spend the time in the shop and try out some turning.

I picked up Richard Raffan's book "Turning Wood" over the week after Christmas and decided to start small. Pens and spinning tops. This of course required a quick trip to my mecca (Lee Valley) and I picked up the mandrel and 5 slimline pen kits. 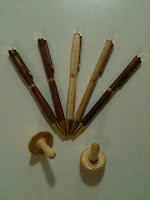 Overall I found the pen turning process to be a great way to start. You can turn at a fairly high speed because your blanks are small and you have the bushings as a guide for your finish thickness at the ends. Just be careful not to cut too deep in the middle (or risk revealing the brass)! I was fortunate and avoided that mistake. The pens were turned from birch, purpleheart and ash. Nothing fancy really. The tops were turned from construction grade 2x4s and are about 1.5" tall.

Not being satisfied, I stared looking for something more challenging. A bowl. I didn't have any blocks big enough to make one. Nor did I know of any tree cutting going on to try green wood turning. Finally, I didn't want to buy a blank for my first try. They tend to be expensive mistakes if you screw it up. So that left me with a segmented vessel. If you're interested in learning more about the process and learning more about turning in general, go to Wood Turning Online. They have a great section of projects from beginner to advanced.

I chose to make a 6 sided bowl to minimize the number of pieces I would have to cut and glue up. Total, it was 18 pieces plus the base which was solid. Wood selection was walnut and maple. Yes, I've made a number of projects from these 2 woods, but that's what I have in surplus. I chose the following to make my bowl:
Gluing up the segments for the top ring was a piece of cake. Gluing 2 wedges at a time and rubbing them together until suction took over and then place on a flat surface covered with wax paper then adding a 3rd segment to get half the ring. The next day would involve flattening the edges of the ring halves to ensure gap free mating.

The middle ring on the other hand presented some problems that caused me to have to go back to the drawing board. Titebond glue has a water component to it. After applying it to a wedge of maple and then to the 3/8" walnut spacer seemed to be okay. But the moisture absorbed into the fibers and caused the spacer to warp so that there were gaps you could park a semi in once the glue dried.

I ended up cutting off the spacers and making new ones. This time 3/4" thick and the glue up went flawlessly. It did have the effect of making the ring a little bigger, but I'll keep that in mind for next time so that I can make the top ring bigger as well.

Once all the glue ups were done, I flattened the rings (and took the corners down) and glued them to each other and onto the base which had been fastened to a glue chuck.and mounted to the lathe using a faceplate.

There were a couple of close calls where the entire project almost ended up as kindling, but in the end it worked out. It measures 6 7/8" across, 1 3/4" tall and he sides/base are about 5/16" thick. Got to say I'm happy with how it turned out. Oh, and the base didn't disappoint with some very interesting figure! 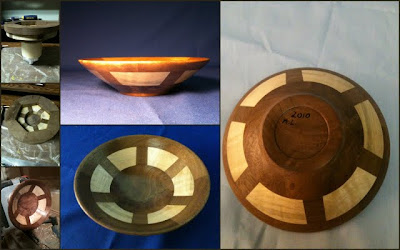 It will be auctioned off in a silent auction happening in February in support of the Mississauga chapter of the Army, Navy Air Force club which supports local veterans (different from the Royal Canadian Legion).

Turning is fun, but there's still a lot to learn about how to best use my gouges.